BBQ and beer cooler in one piece.

BBQ and beer cooler in one piece.

BBQ and beer cooler in one piece. You won’t find this at Home Depot! 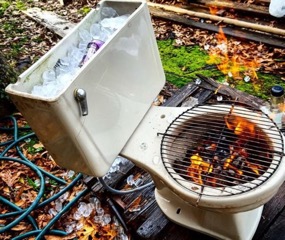 The bartender, knowing this is impossible, agrees. They set it up and the man starts peeing all over the place, missing the cup completely. The bartender gets begins to cheer because he know he just won $5,000.
The man walks over to his friends and comes back to the bartender. He pays the bartender his money with a grin on his face. The bartender asks him "Why are you so happy? You just lost $5,000."

The man replies "I know, but I bet my friends $10,000 dollars that you would cheer while I pee all over the bar."
Joke: A blonde, brunette, and a red head are stuck on the roof of a house. Fire fighters are holding a blanket for them to jump onto. They tell the brunette to jump to safety. When she jumps they pull the blanket away and she hurts her butt.

Finally the blonde gets smart and tells them "I know what you're going to do. Just lay the blanket on the ground and back away.


Joke: A man goes swimming in the ocean but gets sucked out to sea. A boat passes by him and tells him to climb aboard but he says "I have faith, God will save me."

The Coast Guard comes by with a rescue helicopter and tells him to climb the ladder up, but he says "I have faith, God will save me."

The man is now getting tired but thankfully a dolphin swims under him and starts to carry him to shore, but the man pushes the dolphin away saying "I have faith, God will save me.

The man dies and goes to Heaven. He asks God "Why didn't you save me?"

God replies "I tried! I sent a ship, a helicopter and a dolphin!"

The Cow, the Ant and an Old Fart


A cow, an ant and an old fart are debating on who is the greatest of the three of them.

The cow said, "I give 20 quarts of milk every day and that's why I am the greatest!"

The ant said, "I work day and night, summer and winter, I can carry 52 times my own weight and that's why I am the greatest!"

Why are you scrolling down? It's your turn to say something!

Three Toronto surgeons were playing golf together and discussing surgeries they had performed.

One of them said, "I'm the best surgeon in Ontario. In my favorite case,
a concert pianist lost seven fingers in an accident, I reattached them, and 8 months later he performed
a private concert for the Queen of England.


The second surgeon said. "That's nothing. A young man lost an arm and both legs in an accident, I reattached them,
and 2 years later he won a gold Medal in track and field events in the Olympics


The third surgeon said, "You guys are amateurs". Several years ago a woman was high on cocaine and marijuana

and she rode a horse head-on into a train traveling 80 miles an hour. All I had left to work with was the

woman'blonde hair and the horse's ass.