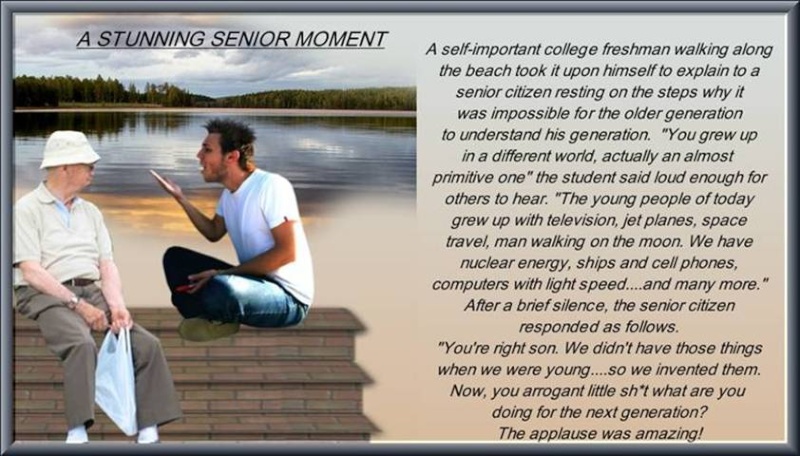 How old is Grandma?

Stay with this -- the answer is at the end... It will blow you away.


One evening a grandson was talking to his grandmother about current events.

The grandson asked his grandmother what she thought about the shootings at schools, the computer age, and just things in general.

The Grandmother replied, "Well, let me think a minute, I was born before:
' television
' penicillin
' polio shots
' frozen foods
' Xerox
' contact lenses
' Frisbees and
' the pill

Man had not yet invented:
' pantyhose
' air conditioners
' dishwashers
' clothes dryers
' and the clothes were hung out to dry in the fresh air and
' man hadn't yet walked on the moon

Your Grandfather and I got married first, and then lived together.
Every family had a father and a mother.

And after I turned 25, I still called policemen and every man with a title, "Sir."

Our lives were governed by good judgment, and common sense.

We were taught to know the difference between right and wrong and to stand up and take responsibility for our actions.

We thought fast food was what people ate during Lent.

Having a meaningful relationship meant getting along with your cousins.

Draft dodgers were those who closed front doors as the evening breeze started.

Time-sharing meant time the family spent together in the evenings and weekends — not purchasing condominiums.

We listened to Big Bands, Jack Benny, and the President's speeches on our radios.

If you saw anything with 'Made in Japan ' on it, it was junk.

The term 'making out' referred to how you did on your school exam.

Pizza Hut, McDonald's, and instant coffee were unheard of.
We had 5 & dime stores where you could actually buy things for 5 and 10 cents.

Ice-cream cones, phone calls, rides on a streetcar, and a Pepsi were all a nickel.

And if you didn't want to splurge, you could spend your nickel on enough stamps to mail 1 letter and 2 postcards.

You could buy a new Ford Coupe for $600, but who could afford one? Too bad, because gas was 11 cents a gallon.

' "grass" was mowed,
' "coke" was a cold drink,
' "pot" was something your mother cooked in and
' "rock music" was your grandmother's lullaby.
' "Aids" were helpers in the Principal's office,
' "chip" meant a piece of wood,
' "hardware" was found in a hardware store and.
' "software" wasn't even a word.

We were the last generation to actually believe that a lady needed a husband to have a baby.
We volunteered to protect our precious country.
No wonder people call us "old and confused" and say there is a generation gap.

How old do you think I am?

Read on to see -- pretty scary if you think about it and pretty sad at the same time.

This woman would be only 61 years old.
She would have been born in late 1952.

Gotta luv them Newfies, they come up with the simplest, most practical (& sometimes logical) solutions.

Each Friday night after work, sun, snow, or rain, Jack, being from Newfoundland, would fire up his outdoor grill
and cook a moose steak. But, all of Jack's neighbours were Catholic. And since it was Lent, they were
forbidden from eating meat on Friday. The delicious aroma from the grilled moose steaks was
causing such a problem for the Catholic faithful that they finally talked to their priest.
The priest came to visit Jack, and suggested that he become a Catholic.
After several classes and much study, Jack attended Mass,
and as the priest sprinkled holy water over him,
he said: "You were born a Protestant and raised a Protestant, but now you are a Catholic."
Jack's neighbours were greatly relieved, until Friday night arrived,
and the wonderful aroma of grilled moose filled the neighbourhood.
The priest was called immediately by the neighbours,
and, as he rushed into Jack's yard, clutching a rosary
and prepared to scold him,he stopped and watched in amazement.
There stood Jack, clutching a small bottle of holy water
which he carefully sprinkled over the grilling meat and chanted:
"You wuz born a moose, you wuz raised a moose, but now you is a codfish."

As far as how is gramma goes , Ive said it a few time after I croak I would like to come back in a 100 years and just take a peek at the world. It just boggles my mind how much technology I have witnessed in my time. Im sure my Dad and His Dad thought the same .

Yes, Rick. I can still remember when we didn't have indoor plumbing. (Just vaguely - but I have flashbacks of having to go out to the outhouse!)

It does make us think about everything that has come about. These years I think would be the most advanced in history. I think there was little developed in the 1800's, gas engine, phone??"

There was the "industrial revolution" and then the "technology revolution", I guess.