>
>
> It happened in a Metro station in Montreal ...........
>
> There were protesters on a concourse handing out pamphlets on the evils of Canada. I politely declined to take one.
>
> An elderly woman was behind me getting off the escalator and a young (20-ish) female protester offered her a pamphlet, which she politely declined. The young protester put her hand on the woman's shoulder as a gesture of friendship and in a very soft voice said, 'Lady, don't you care about the children of Iraq?'
>
> The elderly woman looked up at her and said, 'Honey, my father died in France during World War II, I lost my husband in Korea, and a grandson in Afghanistan. All three died so you could have the right to stand here and bad mouth our country. If you touch me again, I'll stick this umbrella up your ass and open it.'
>
> .................God Bless Canada

Two priests are off to the showers late one night.

They undress and step into the showers before they realize there is no soap.

Father John says he has soap in his room and goes to get it, not
bothering to dress.
He grabs two bars of soap, one in each hand, while he is halfway down
the hall when he sees three nuns heading his way..
Having no place to hide, he stands against the wall and freezes like
he's a statue.

The nuns stop and comment on how life-like he looks.
The first nun suddenly reaches out and pulls on his manhood.
Startled, he drops
a bar of soap.
"Oh look" says the first nun, "it's a soap dispenser".

To test her theory the second nun also pulls on his manhood.
Sure enough, he drops the second bar of soap.
Now the third nun decides to have a go.

She pulls once, then twice and three times but nothing happens.
So she gives several more tugs, then yells....

A drunk man who smelled like beer sat down on a subway next to a priest.
The man's tie was stained, his face was plastered with red lipstick,
And a half-empty bottle of gin was sticking out of his torn coat pocket.
He opened his newspaper and began reading.

After a few minutes the man turned to the priest and asked,
"Say Father, what causes arthritis?"

The priest replies, "My Son, it's caused by loose living,
Being with cheap, wicked women, too much alcohol, contempt for your fellow man,
Sleeping around with prostitutes and lack of a bath."

The drunk muttered in response, "Well, I'll be damned,"
Then returned to his paper.

The priest, thinking about what he had said,
Nudged the man and apologized.
"I'm very sorry. I didn't mean to come on so strong.
How long have you had arthritis?"

The drunk answered, "I don't have it, Father.
I was just reading here that the Pope does."

MORAL: Make sure you understand the question before answering

And God promised men that good and obedient wives would be found in all corners of the world. 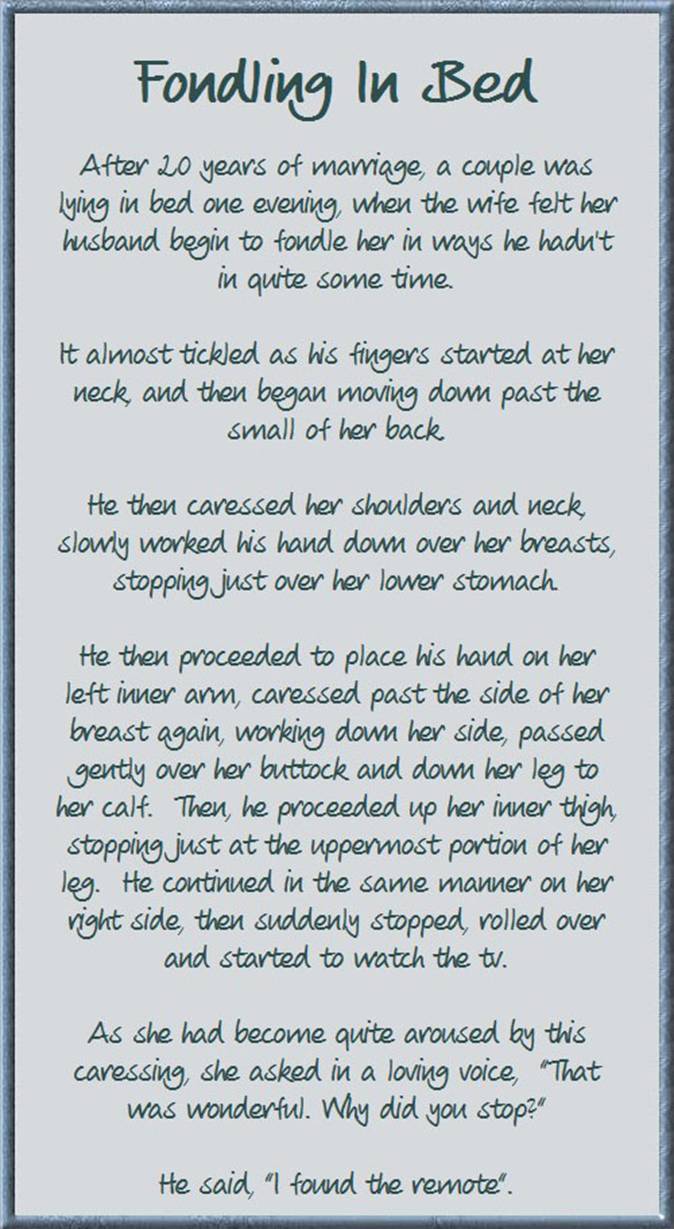 A Scotsman moves to Canada and attends his first baseball game.

The first batter approaches the batters' box, takes a few swings and
then hits a double. Everyone is on their feet screaming "Run"

The next batter hits a single. The Scotsman listens as the crowd again
cheers "RUN RUN". The Scotsman is enjoying the game and begins
screaming with the fans.

The fifth batter comes up and four balls go by. The Umpire calls: "Walk."

The batter starts his slow trot to first base. The Scot stands up and
screams, "Run ye lazy bastard, RRUNN!"

The people around him begin laughing. Embarrassed, the Scot sits back
down. A friendly fan notes the man's embarrassment, leans over and
explains, "He can't run -- he's got four balls."

The doctor goes hunting and returns
the following day and asks: "So, Ole,
How was your day?"

Ole told him that he took care of
three patients. "The first one had a
headache so I gave him TYLENOL."

"Bravo, mate, and the second one?"
asks the doctor.
"The second one had stomach burning and I gave him MAALOX, sir," says Ole.

"Bravo, bravo! You're good at this and what about the third one?" asks the Doctor.

"Sir, I was sitting here and suddenly the door opens
and a woman enters.
Like a flame, she undresses herself,
taking off everything including
her panties and lies
down on the table and shouts:
‘HELP ME - I haven't
seen a man in over two years!!’"

"Tunderin' Lard Yeezus, Ole,
What did you do?" asks the doctor.

Well one day Harry the Eagle waited at the nest for Mary, his darling of 10 glorious years.

After a while when she didn't return he went looking and found her. She had been shot dead!

Harry was devastated, but after about six minutes of mourning he decided that he must get himself another mate, but since there weren't any lady eagles available he'd have to cross the feather barrier.

So he flew off to find a new mate. He found a lovely dove and brought her back to the nest.

Well this so got on Harry's nerves so he kicked the dove out of the nest and flew off once more to find a mate..

He soon found a very sexy loon and brought her back to the nest. Again the sex was good but all the loon would say is........

Once more he flew off to find a mate. This time he found a gorgeous duck and he brought the duck back to the nest. This time the sex was great, but all the duck would say was.....